(deutsche Version, version française)
The „Diesel issue“ (as VW Chairman Poetsch likes to call the volkswagen scandal) is a rotten fish. Both uninteresting and disgusting. Time Europe July 4, 2016 issue does not even cover the 56th General Assembly.

But there is a story behind the rotten fish!

Please take a look at the Chairman’s dirty tricks, which turned General Meeting of Volkswagen into an absurdly boring ritual.

And there are plenty of stories aside the „Diesel issue“, which should have been properly told at the General Assembly. For instance the „Brakes Issue“, which is about rotten Brakes!

Here comes the „Black is Blue“ issue, embedded in the story how I tried to offer unsolicited advice to VW. Nobody but me in the List of registered Speakers refrained from touching the „Diesel issue“. Almost every registered Speaker wanted to disapprove of the actions of the members of the Board of Management and/or the Supervisory Board for fiscal year 2015. Only the countermotion of Dr. Haas and my countermotion refreined from opposition to these People. I calculated this would make sense to raise their attention. I expected to get the attention of the board by presenting an interesting, unusual matter.

I got the attention of Mr. Poetsch, who did his very best to sabotage my speech. His assumed intention was not to discuss the question of the purpose of BlueMotion cars and whether they actually are fit for purpose. He succeeded.

But by trying to suppress our communication in general and the „Brakes Issue“ in particular, Poetsch displayed complete mistrust. May the „Black is Blue“ issue be proof of betrayal, and not proof of stupidity or blindness?

About „Black is Blue“ issue:
Volkswagen distributed a blue pen to small shareholders meant to tick voting cards. Without any doubt regarding proper counting of votes I used the blue pen.

But there was an instruction on every voting card which read:
„voting cards must be marked by distributed black pen to be counted properly“. At first glance this seemed to be just another mistake. If Poetsch distributed blue pens to small shareholders, this should have been alright. During the convention I did not even got the idea big shareholders could use other pens.

Finally I was allowed to speak at 18:30. I was called to speak with five seconds of notification only. I still believed Poetsch were just incompetent to organize such an event, but not prone to ill faith. After 8,5 hours of waiting, during which I was refused any piece of information regarding time and duration of my speach, Poetsch stated that my predecessor was absent, and my prechious 3 Minutes were running out. Poetsch could have proposed an interruption of 60 seconds for me to be prepared. He didn’t. So there was no time to search for my notes. I knew they were neatly filed – but in which Pocket? I have to admit, I was shocked and confused for a moment. After 8,5 hours of waiting I had to decide within seconds either to waste my time searching for the notes or to skip the notes and improvise. I decided for the latter.

I started my improvisation by telling the very strong feelings which rushed through my blood veissels at that instant:

I am so happy that I finally am allowed to speak,

I am so happy that today’s experiences proved final confimation that I did right 20 years ago, when I choose to enter the workforce of the Mittelstand.

The latter was not very smart to tell to the board. It was a very blunt way to tell the board that I felt sorry for them. I felt sorry for them for they were trapped in a grotesque giant which appeared to be so dysfunctional at the general assembly. Trapped in a Sick man of Europe. (see my german text for deeper explanation) Despite the poor start I suceeded to deliver the unsolicited advice to VW.

My concept of speach was well prepared. But Poetsch denied me to present my countermotion appropriately. He did this despite the fact that I had properly registered the countermotion more than one month in advance. Even cut down to 3 minutes my concept worked. But in a matter of fact Poetsch sabotaged even the cut down presentation. I felt like Poetsch maliciously put a spoke in my wheel. But I could not believe it. I didn’t immediately understand Poetsch’s motivation.

Cui Bono – who would profit if speakers were sabotaged for purpose? Later I understood a possible motivation. Now I assume that Chairman Poetsch disrespected small Shareholders Right of speach for purpose to destroy attention to and interest in the discussion in Hall 3.

Poetsch supposedly wanted to move the small shareholders from the podium in Hall 3 to the snacks in Hall 2. His assumed intent: small shareholders should have a good time eating, drinking and enjoing the Volkswagens product exhibition in Hall 2. They should forget their shareholder rights and focus on their identity as consumers. To achieve this aim, Poetsch needed to turn the discussion in Hall 3 more boring then the snacks in Hall 2.

As I discovered his hidden motivation two days later, I realized that I had fallen victim to a deception at least, if not fraud. I don’t trust Poetsch any more. My good will towards Volkswagen suffered. Now I think Poetsch is capable of any dirty trick, any fraud. 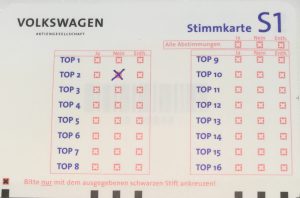 This is an image of voting card S1. According to written instructions the voting card S1 was associated with TOP2. My Countermotion refuses the proposed distribution of profits the Board proposed within TOP2. So I ticked no – a blue cross marked with the blue pen. The line at the Bottom of the voting card explains that only black marks are counted properly.

The voting system would have felt complicated enough if the written instructions had been precise and reliable. Voting would have been a challenge even if I had been fully recovered. So I accepted advice from the friendly staff agent. I mentioned the Black is Blue issue. She confirmed everything was in order.  Other small shareholders already had asked for that, she told me. It sounded like nobody of Volkswagen staff took notice beforehand. Sounded probable. It matched the image which the board produced when it tried to explain the „Diesel issue“. I just wanted to return home. I just wanted to quit the miserable General Assembly.