On a recent trip to Hamburg-Billwerder, I found this memorial plate: 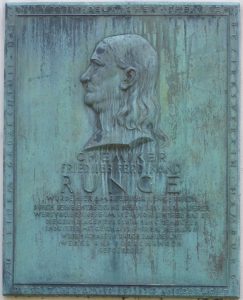 South of the Boberg Aerodrome (Gliders only), at Billwerder Billdeich 140 this plate hints to the place where Friedlieb Ferdinand Runge was born 8. February 1794.

Among many achievements, Runge discovered the first coal tar dye (aniline blue) in coal tar and he invented a process of Dyeing clothes by the means of coal tar dye. He published his results in 1834. At that time there was no german national state. Consequently there was no such thing as a german patent office. So Runge’s Inventions never were filed for patent. An US-american patent-office existed since 1790, but obviously an Inventor from Billwerder, next to Hamburg, had no means to file for a patent in USA at that time. And apparently there was no economical interest in his inventions at that time. Obviously he Importance of his work was not immediately understood.

The lack of a german patent office may be considered as a disadvantage to Runge and the german people in general. But there was an advantage. In the german countries one could observe a weakness in control of intellectual property during 17th and 18th century, which enabled publishers like Thomas von Trattner to distribute books rather cheap. This may have contributed to a high degree of literacy in the center of Europe. It may have contributed to a competitive advantage of the German Reich after its formation in 1872.

A german patent office was established in 1877, ten years after the Death of Runge. The very first German Patent, DE000000000001, was about a process of production of a red Dye. „Verfahren zur Herstellung einer rothen Ultramarinfarbe„. This is a good hint to the enormous relevance of Runges work.