Packed with pages of patent prose there come paragraphs poor in technical payload. Figure 7a: On Drone-Terror, 7b: A Tribute to Kafka, 7c: A Tribute to Bill Clinton, 7d: On Vietnam. 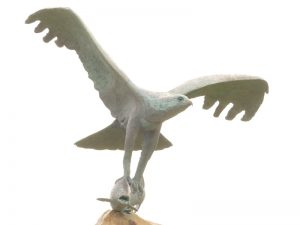 „Figure 7a illustrates disadvantages of an unprotected communication. The citizen 710 of a resource-rich country uses a mobile phone, indicated by headset 9. Above him revolves a monitoring apparatus 720 which is prepared to discharge a weapons system 730. The monitoring apparatus locates the mobile phone of citizen 710, which does not use encryption, and intercepts conversation contents. The monitoring apparatus sends the conversation contents to a clerk 740. The clerk 740 represents the interests of a industrialized country. The clerk 740 decides on the basis of conversation contents and a death list 66, and premises 67 whether citizen 710 may represent a risk to the interests of the industrialized country, whether the call contents should be stored permanently, and whether the weapons system 730 should be used to kill the citizen 710. […]
From the perspective of citizen 710 there is the very unsatisfactory situation that he can not judge whether his name is marked on the death list 66. The way to get placed on such a death list may indeed be varied. An author of the death list 66 may have fallen in love with citizen 710’s wife Bathsheba. Therefore this author may have put citizen 710 on this death list motivated by a purely personal interest to do so. And citizen 710 cannot guess the premises 67. If the industrialized countries policy seeks to replace democracy in the resource-rich country with a dictatorship, then it may be dangerous to reveal oneself as a supporter of democracy.
However, if the government of the industrialized country by accident wants to encourage democracy in the resource-rich country, then it may be dangerous not to reveal oneself as a supporter of democracy. In this way the monitoring equipment 720 and weapons systems 730 frighten the population of the resource-rich country and provoke a state of Terror.“

Figure 7b: A Tribute to Kafka

consists of a single conditional sentence inspired by Kafkas Up in the Gallery:

„When Alice (A) generates an asymmetric key pair, and sends the public key over an unprotected channel to Bob (B), so Eve (E) can listen, and if Marvin (M) decides not to distort an unprotected transferred Public Key , and if Bob can transmit in the same conditions its public key to Alice, and if Alice and Bob then use the exchanged public keys to encrypt and to sign their own messages, and if they call each other at least once, and identify themselves by their voices and on the basis of shared secrets, and reinsure that they actually have received each other’s encrypted messages, and if Alice and Bob can exclude that Marvin has the ability to manipulate a public key such that both Marvins private Key, as well as the original private key are capable to decrypt data encrypted with the manipulated Public Key, and if Alice and Bob can exclude that Eve has a hardware running the Shor’s algorithm, and if Alice and Bob can exclude that Eve has a different algorithm for the calculation of private keys from public keys running on Eves hardware, then Alice and Bob may trust their exchange to be confidential, without the need to rely on Certificate Authorities like DigiNotar or any hierarchical public-key Infrastructure.“

The polemic picks holes in a Plutocracy playing with Pandoras box, prosecuting its President for the choices of his most private part (which any reasonable people would consider just that: private.) The pamphlet pokes fun at President Clinton’s bombing of a pharmaceutical production plant in poor Sudan. Few perished immediately and so did the Impeachement of Bill Clinton. Clintons Presidency prevailed. „Operation Infinite Reach“ paid off. Who cares about the collataral damage? (To Werner Daums estimation of the total death toll)

If there is any interest in Vietnam, this may be translated later.