Or why does Daimler untruthfully claim on its Internet pages, Daimler’s involvement with the Nazis had only begun in 1933?

An accident seems unlikely to me

In January 2016, I had asked Daimler kindly and carefully, whether this is an accident. I did not get an answer. Are there so many bloggers who want to clarify Daimler’s role in the Nazi seizure of power that Daimler can not meet with the answer? I do not believe that either. Otherwise my blog would not be ranked high in the Google inquiry Daimler Machtergreifung  (= Daimler Nazi seizure of power).

I suppose Daimler intentionally conceived a misleading Internet appearance. They intentionally mislead the visitors to the website to make them purchase products that some visitors would not buy if they were aware of Daimlers sponsorship of the Nazis before 1933.

And it also seems to be conclusive that Daimler wants to avoid my question about Daimler’s investment in the election campaign of the 43rd President of the USA. For if Daimler promoted the tragic* man George W. Bush to preserve its business interests, and this becomes evident, then this information might also deter potential customers from buying Daimler products. (Timetable regarding EADS, DaimlerChrysler AG and Bush, in german)

A trace of money led to national socialism,

which has already been thoroughly researched and does not originate directly from Daimler.

Daimler apparently has not been involved in the Industrielleneingabe of 19.11.1932, not in the Secret Meeting of 20 February 1933. And basically, „The Daimler-Benz Book“ and the corresponding collection of sources give a fairly detailed account of the bad economic situation of Daimler-Benz AG in 1932, from which it was saved by the Nazi seizure of power. These books, in relation to the drama of this situation, give surprisingly few examples for the promotion of the Nazis by Daimler-Benz AG. The following letter, therefore, is a sort of low-light (source: „Die Daimler-Benz AG 1928-1948. Schlüsseldokumente zur Konzerngeschichte“, page 121): 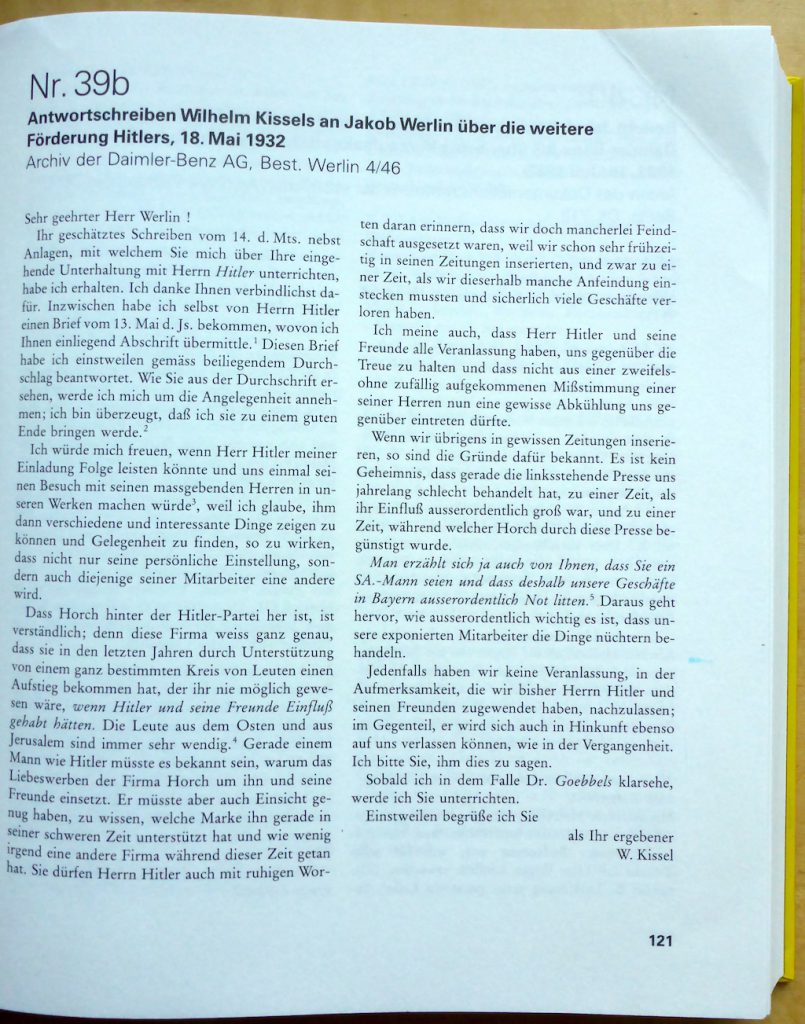 Daimler’s behavior in the run-up to the Nazi seizure of power seems much less abominable than that of other companies and individuals. All the more puzzling is Daimlers misleading website.

The proportion of Daimler to Hitlers rise appears to be 1000 times less than that of Edwin and Helene Bechstein. But the Internet appearance of the company Bechstein is truthful. There is clear reference to „Die Bechsteins – Eine Familiengeschichte“ by Gunna Wendt (=The Bechsteins – A Family History). And this book leaves no doubt that the daughter-in-law of the  companies founder has decisively promoted Adolf Hitler’s rise.

But if Daimler’s share in the rise of Hitler was so much lower, should it be neglected? For sure not. National Socialism has demanded too many millions of dead people, as a small share of complicity could be negligible.

Apparently Daimler wants the term Nazi Era to refer only to the time after the Reichstag election on March 5, 1933, and to incite the reader to the fairy tale that the Nazis had come to power on the basis of an accident of history without Daimler’s promotion.

But even regarding the time after the Reichstag election on March 5, 1933, Daimlers website is extremely incomplete. The miraculous upswing which Daimler experienced after March 5, 1933 remains unappreciated. The rear of the Daimler-Benz book, showing a reproduction of a poster from 1935, recalls the abominations committed by Daimler after 1933. On this poster, Daimler underlined his ties with the Nazis. It is reproduced here for the purpose of the civic education in the sense of §86 and §86a StGB. The Intention is to teach the historical link between the displayed trademarks.

* By characterizing George W. Bush as a tragic (and not a terrible) human being, I do not want to blunt the blood that sticks to his hands. Of course, he has committed terrible acts. I am referring to the particular tragedy of his deeds. Bush Junior – unlike Hitler – still had in the adult age a father whom he could have asked for advice. He could have asked his father why the letter had avoided the destruction of the Iraqi state and the disempowerment of Sadam Hussein in 1991, and the world would have been spared a hundred thousand dead and an ongoing chaos.